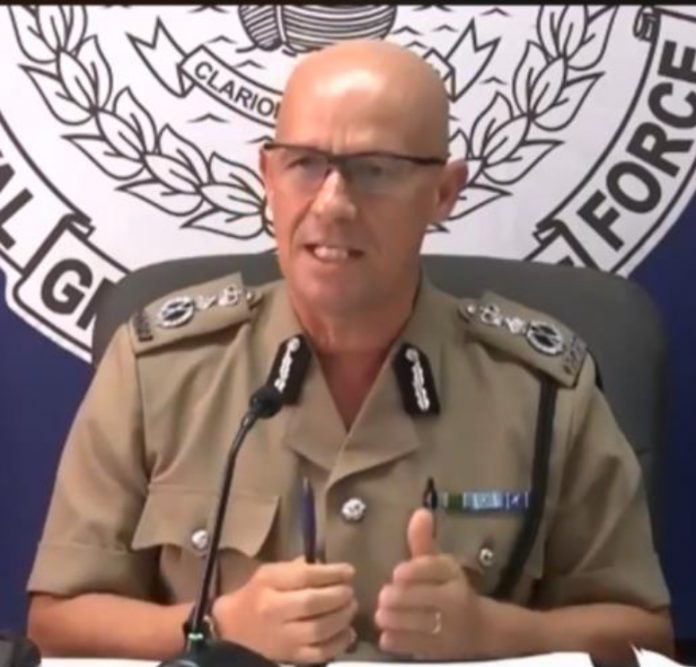 With the exception of homicides and praedial larceny cases, the Royal Grenada Police Force (RGPF) reported a contraction in “almost all category of crimes” for the period January to June 2020.

During a media conference on Wednesday, Acting Commissioner of Police Edvin Martin shared statistics for 2018, 2019 and 2020..

For Harm offences (murder, attempted murder, manslaughter, maiming, wounding, causing harm, grievous harm, etc.), there was a 15.5% contraction in reported crimes over a 19.4% contraction over 2018 and 2019 accumulatively.

Martin said “the incidence of homicides remains a critical concern for the RGPF. This is one of two categories that is showing an increase in this category of harm offences.”

10 murders were recorded at the end of June and that number has since moved to 13 to date (12 murders and 1 case the cause of death is to be determined). The Commissioner (Ag) reported that five murders occurred at dwelling houses, eight at public spaces with offensive weapons (such as knives, and cutlasses) as the instruments in six of those cases.

He pointed out that the main cause of homicide is conflict suggesting that anger management and conflict resolution need to be considered.

Commissioner Martin noted that there is a recorded 66% increase in persons under 13 years, as he referenced on Monday a 68-year-old was charged with raping a 9-year-old.

Martin thus urged persons to use the Police 400 hotline number to report cases or suspected cases of abuse.

For the category of White Collar crimes (Forgery, fraud, false pretense, embezzlement, etc.), there was a reduction of 15% in 2020 over an accumulative 75.7%.

Property crimes (including burglary, house breaking, stealing from a dwelling house, arson, trespassing, and praedial larceny) saw an increaseof 14.1% in 2020 over a 3.8% increase over 2018 and 2019.

He said this indicates that the police need to revisit its strategies to develop closer working relations with farmers and other stakeholders and ensure greater patrol and response mechanism.

Weapon offenses has seen a reduction of 14% but an increase accumulatively of 43.6% in the area of offensive weapons.