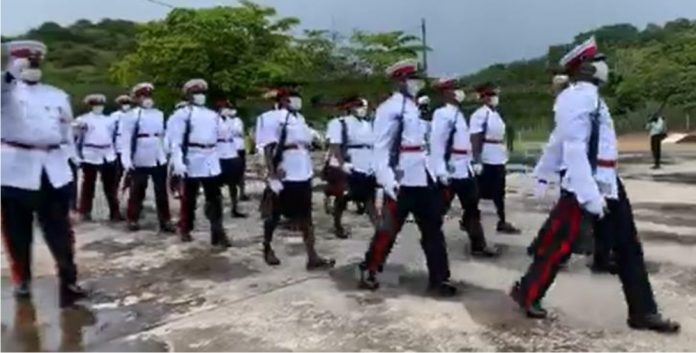 A total of 22 recruits have been inducted into the Royal Grenada Police Force (RGPF), following the completion of a nine-week special initiation training course No. 2 at the Police Training School.

Chief Training Instructor Woman Inspector Maureen John said the course was unique in that the trainees were persons who have been functioning within the RGPF in varying capacities and some of them were advanced in years (40s and 50s) beyond the norm for recruits.

According to Inspector John, though outdoor practical training was conducted at the shooting range in Pearls, Saint Andrew, this cohort was the first to do practical training via the indoor electronics simulation range recently acquired by the RGPF.

Commending the group on a job well done, notably securing an average examination pass rate of 76%, the Inspector urged the graduates to remain focused and maintain the standards learnt.

Deputy Commissioner of Police, Franklyn Redhead, in delivering the Feature Address, reminded the new Officers to keep striving to be superior to their former selves, maximise and make the best use of the opportunities before them, be fearless in the face of adversities and to continue to develop their professional abilities.

“We are embracing a new beginning,” she said, recalling that they started off the course anxious and fearful but that quickly faded with time. In addition, James said their time management skills improved. She said their moments of failure was frustrating, but it challenged them to do better. Classes became their battlefield, though drills was most challenging, she said.

However, they motivated each other, James noted, adding “The training has helped us to grow, value teamwork and gave us a better understanding of policing. It was definitely a humbling experience.”

Among the eight awards distributed by Acting Commissioner of Police Edvin Martin are:

– Highest Aggregate, who performed superb in all areas – WPC Lesia James. She obtained the highest individual score in theoretical examination with a pass rate of 84%.

The first special initiation training course was held in 2011.