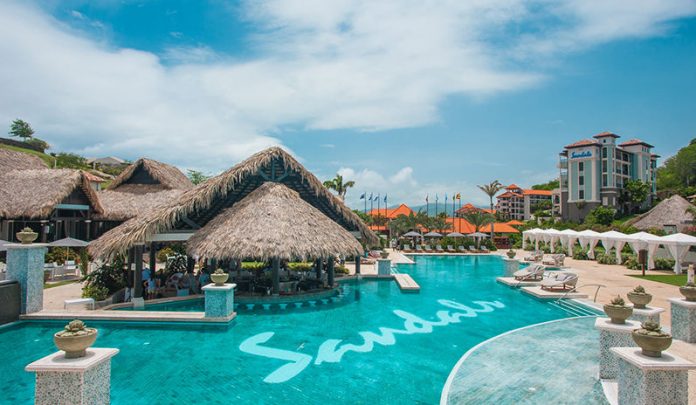 The five-Star Resort, Sandals, in an open letter from Peter Fraser, the General Manager is claiming that the Government’s press briefing last Sunday on a COVID-19 cluster was devoid of facts.

The Resort said that it was dismayed to see the Acting Chief Medical Officer and the Minister of Health speaking at a time of limited facts and information yet insinuating a lapse in protocols at Sandals.

Sandals said reports identifying the source of the positive cases are completely unsubstantiated. “As we all know, this virus is particularly good at both spreading and doing so undetected. This is why our monitoring protocols are so important. As of today, the source is not yet known, and Sandals is fully supporting the contact tracing and fact-finding efforts, which are ongoing, to identify a source and any key learnings available from this situation.

“In addition, information provided to the local media that the resort was evacuated due to this situation and instructed to close is false. At all times, we take into account the most stringent guidelines to ensure our resorts are as safe and enjoyable as possible. All guests at Sandals Grenada must comply with the travel and health requirements of the government of Grenada for entry into the country, which includes receiving a negative COVID-19 test.

“As many may not know, as part of our stringent protocols, it was, in fact, the proactivity of our team on the ground at Sandals Grenada who initiated the random testing, which we subsequently funded – that allowed the Ministry to run further testing.”

The Resort stated that as further evidence of its high standards, there have been three surprise inspections of its health and safety measures by the Grenada public health authorities, including a personal visit from the Minister of Health and Social Security. On all three occasions, Sandals Grenada was deemed to meet and exceed all standards set by the government.

Team members who received positive test results are currently said to be under quarantine. “As members of the Sandals family, we are caring for any needs they may have. Subsequently, we have seen a number of persons who were initially labelled as positive by the authorities being later told that they were in fact negative. In one particular case a health official apologised to one of our team members after being isolated for days due to his test being incorrectly labelled.

“We have been in constant communication with the government and although we have verbal acknowledgment on a number of these significant inaccuracies and supporting confirmation, we continue to express great disappointment that we have not seen any official public declaration to correct any of these known discrepancies.”

Sandals said it continues to draw upon the recommendations from international and local public health authorities to ensure that its protocols take into account the latest information and abide by the Pure Grenada Protocols that are continuously deployed, with a zero-tolerance policy for staff or guests who cannot comply with these vital health and safety measures.

Sunday, the nation was informed that a cluster of 26 positive COVID-19 cases have been diagnosed, including nine guests and employees, as well as their contacts.

The Ministry of Health revealed that the discovery was made following proactive testing of employees and guests last Friday and Saturday, as part of the Ministry’s continuous testing of frontline staff in sectors directly related to tourism, travel and health.

As of Thursday, this cluster resulted in Grenada recording 45 active cases, nine new ones. The Ministry of Health in Thursday’s news release said seven of the nine guests at Sandals Grenada who tested positive, have since left the island, noting that they did so before results were obtained.

Meanwhile, the Ministry of Health is refuting claims that some individuals received false positive results and were later called by health officials to retract those results. In a press release the Ministry said that at no time were the results called into question, and at no time did anyone from the Ministry call anyone in quarantine to retract diagnoses.

From the onset of this virus, the Ministry said it has stood by the integrity of the PCR Test as the scientific gold standard in the industry for diagnosing the virus. So, anyone spreading such rumours that call into question the integrity of the test results is seeking to incite fear, panic, and disorder, and is creating mistrust in an already delicate situation, as we grapple with this outbreak.