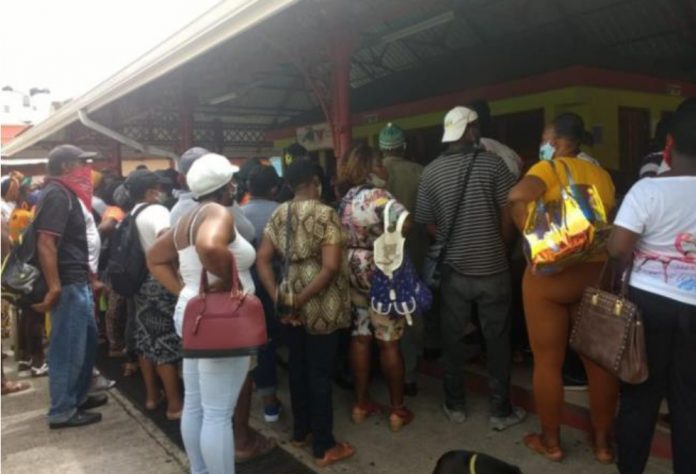 The installation of sanitation sinks, the cleaning of the drainage system, replacement of deteriorated grills and solid waste disposal are all part of the sanitization period at Saint George’s Market Square in preparation for vendors to return.

The Ministry of Infrastructure Development and Implementation embarked on the sanitization from Sunday July 12 to July 19 in keeping with the general sector-based protocols for the reopening of the market. Sanitization is part of the criteria for resuming operations in that public space.

At the conclusion of the sanitization process, an inspection visit will be conducted by relevant officials from the Ministry of Health, Tourism and the Ministry of Infrastructure Development.

To support the process, the Ministry held meetings at the Market with vendors to explain the protocols. The first meeting was held on Monday July 13 with a group of 129 vendors who normally occupy the open area of the market.

Issues such as security arrangements and a schedule for regular cleaning were discussed. The vendors also made recommendations to improve the operations and management of the facility. Vendors expressed their appreciation for the meeting and their willingness to cooperate with the protocols established to support a clean environment and to safeguard public health and safety.

The second meeting was held on Tuesday July 14 with Group 2 consisting of the Spice Vendors in Building I and on Wednesday July 15, the Ministry met with Group 3, which is made up of vendors at Building II.

To this Prime Minister Mitchell said that there has not been a discussion with anybody on the sale of the market.

“You cannot sell any Government assets like this. I am amazed at the level of the irresponsibility of some people. But I have been in politics long enough to know that some people will do and say anything to get attention or make a point one way or another to hurt somebody they believe they don’t like. So totally outrageous and stupid. It is something themselves should be embarrassed and hold their heads down in shame,” he said.

To the vendors who felt that they were treated unfairly as a result of what seems to be an ad hoc way of closing the market, Dr Mitchell said, “Some of the information that we have found out now was not before us. But we take responsibility because we are the Government in power. We have apologized for the lack of information and communication. Corrective actions are being taken.”

He added “We are correcting the mistakes and I think the Ministry of Works who has the responsibility for the market have met with the vendors and from all indication it appear now they are much more satisfied with the present situation.”

The date for re-opening and the protocols for operation at the Saint George’s Market will be announced soon but nail technicians and hair salons will be debarred.

Raphael Beggs, President of the Saint George’s Vendors Association called on his membership to cooperate with the Government and comply with the request of removing their dilapidated structures to accommodate a facelift at the market; this is expected to boost the ambiance for business.