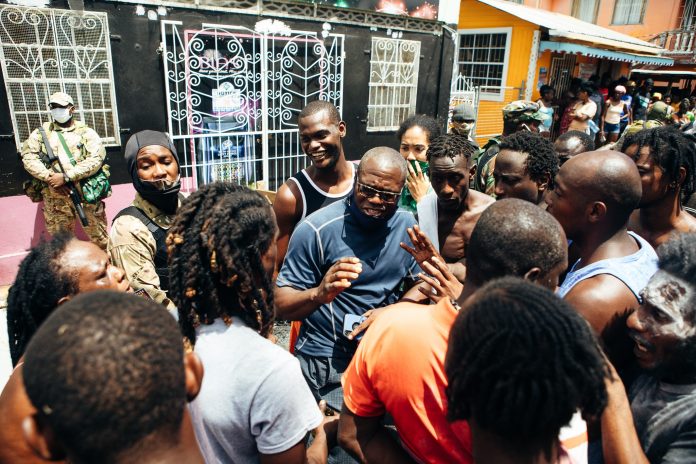 The Royal Grenada Police Force (RGPF) has launched an investigation into an Officer-involved shooting that resulted in the brief hospitalization of one young man, who was discharged on Wednesday.

On the morning of Sunday July 05, 2020, Officers attached to the Gouyave Police Station turned up after 6am at the Charles’ home in Gouyave, Saint John, in search of one of the occupants.

During a media briefing at the Gouyave Police Station on Monday, Attorney-at-Law Jerry Edwin, who is representing the family in this matter, said no search warrant was presented to the family. Therefore, he said Ms Charles denied the officers entry into her home.

Edwin, speaking on behalf of his clients, recounted that the officers waved a pair of handcuffs at Ms Charles informing her that they were there for one of her sons.

He said when one of the female Officers tried to push open the gate to the verandah, Ms Charles attempted to close her door and there was an exchange of words between them.

Jamal Charles, on hearing the commotion, came to the door inquiring what was happening and a gun shot was fired in his mother’s direction that hit him in his upper thigh. Edwin said it was from a 9mm weapon.

Attorney Edwin said the Police Officer (Corporal Garcia) who fired the shot was about six feet away from Jamal. “He was no threat to the Officer,” he said.

Edwin stated that after the shooting, the police officer, assuming in fright, dropped the handcuff and did not recover the shell from the bullet. However, he said “the shell has been recovered by the family as is the handcuff. We will make them exhibits in the proceedings that follow.”

It was reported that the officers were in search of Jamal’s brother.

On Monday Jamal’s parents, his brother and two eyewitnesses gave statements about the incident at the Gouyave Police Station.

Jamal, who is a player on the national football team, is now at home recovering. It is reported that fragments of the bullet are still logged in his leg.

This incident sparked protest in the town of Gouyave Sunday morning as villagers called for justice and for Officer Garcia to be removed. The villagers claimed that the victim is one of the positive young people in the town and is not a troublemaker. They were further enraged as the officers left Jamal bleeding in the verandah to be taken to their vehicle by the villagers.

There was a period of mayhem as the residents blocked vehicular traffic by placing garbage, old appliances and stones across the streets which attracted the attention of high-ranking officers to intervene and asked for calm as the matter is being investigated.

The investigation is being spearheaded by the Community Relations Department (CRD) of the RGPF in Saint George’s. The CRD is headed by Supt Vannie Curwen.

During a police media briefing on Wednesday, Curwen, who is a former prosecutor, pointed out that from observation in recent days there has been a lot of biased publicity on matters that are under investigation or heading to the court.

He commented, “As a Police Force we do not have the authority to tell anybody what they can or cannot say in public, but I think it is a dangerous precedence we are setting when we set our people up to expect a particular outcome ahead of an investigation.”

He continued, “We do not know what will come out of any situation. We do not know how the court will treat with any particular matter. But when we try these matters in public and we sway a section of our population down a path and God forbids the court does not adhere to the narrative that is out there, you can see how dangerous that can be with the expectation of people.”