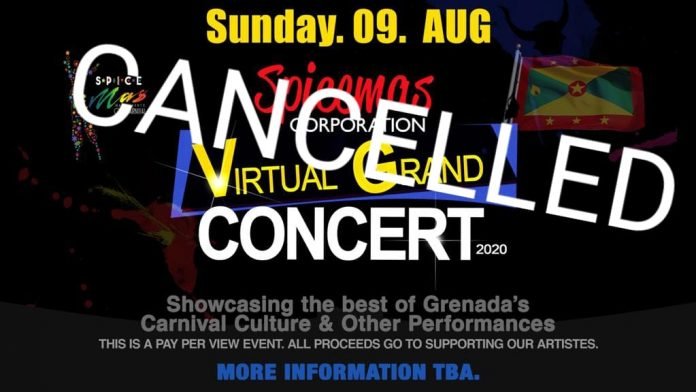 Up to press time on Thursday, an explanation was not forthcoming from the Spicemas Corporation (SMC) for the cancellation of its virtual carnival activities.

June 25 saw the first staging of Carnival City and it was expected to take place every Thursday until July 30, 2020, from 7pm-9pm. However, on Wednesday morning, the SMC posted this week’s Carnival City flyer with the word cancelled on it, which incited comments from persons expressing disappointment and calling for an explanation.

Three hours later, the SMC then posted the flyer for the virtual grand concert that was carded for August 09, 2020, with the word cancelled on it, also without an explanation.

Nonetheless, Minister of Culture, Senator Norland Cox had informed this newspaper on Thursday that information on this development will be forthcoming.

The four previous stagings of Carnival City, which was streamed from the national stadium, was carried by a different media house weekly.

With the cancellation of 2020 Spicemas due to COVID-19, Senator Cox on a recent radio programme had said the virtual approach to Spicemas was to fill the void leading up to Carnival weekend. He shared then that requests have been made and permission was granted for virtual events. One such event is the Cyber Soca Monarch being organized by Sunshine Promotions along with its title sponsor Digicel. 9 Soca artistes will compete in the Power and Groovy Soca segments, for $85,000 in prizes.

In a press release, Sunshine Promotions informed that its show has not be cancelled and will proceed as advertised.