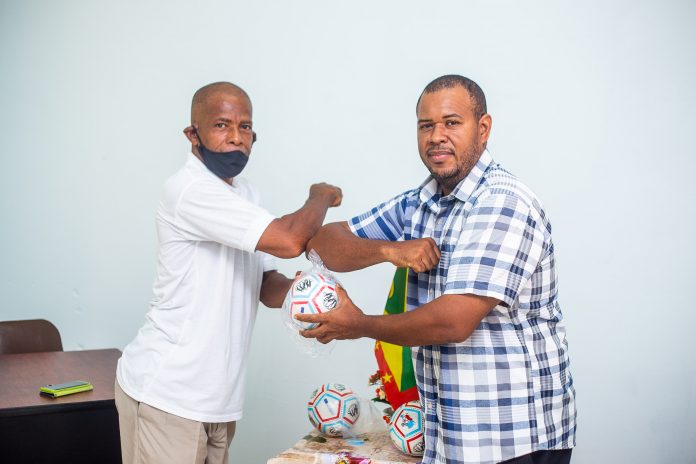 The Grenada Paralympics Committee (GPC) on behalf of the International Campaign “A Ball For All” presented special footballs to the Resource Center, which coordinates

activities for the visually impaired students in Grenada.

President of the Paralympics Committee Ray Roberts presented the footballs to Elias Ogilvie at a recent ceremony.

In his remarks, Roberts said the Paralympics Committee was delighted to be part of this initiative noting that among the objectives of the world-wide campaign was a ball distribution for free to blind or visually impaired children and young people around the world; as well as to reach out to special schools for inclusive physical education activities.

Roberts said it is the hope of the campaign that the Implementation of educational programs in children’s and young people’s communities will encourage and promote empathy and inclusion.

The target groups for “a ball for all” include:

In his response, Ogilvie said it’s a new initiative for his students at the Resource Center and gave the assurance of his commitment to encourage all the students to make blind football a part of their recreation.

Ogilvie said as part of his studies in Jamaica he encountered blind football and is optimistic that many of his 34 students will participate in blind football.

The special footballs are designed for the visually impaired. Each ball has a bell inside of its which rings as it rolls along the playing field thus enable the impaired player to keep track of it.

“A Ball For All” has already been distributed to 104 nations around the world.

One member of the Grenada Paralympics Committee Shaka Logie in 2019 participated in a training program in Peru – coaching blind football, and he has given a commitment to assist with the coaching of the game in Grenada.

The Grenada Paralympics Committee is looking forward to physical education teachers and coaches being part of the development of blind football, and within the next five or so years being able to train a Grenada blind football team.

Blind football is played in neighbouring Trinidad and Tobago and across the Americas and the world.

Facebook
WhatsApp
Previous articlede la Mothe: I was not evicted
Next articleMinister of Sports & GFA agree to working together to develop football