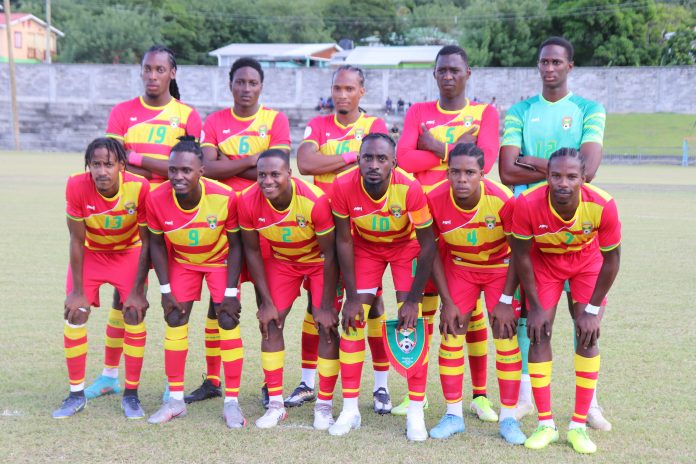 After collecting one point from three matches in the Concacaf Nations League (CNL) thus far, the Spiceboyz are still in the mix for direct qualification to the 2023 Concacaf Gold Cup or at the very least, a place in the 2023 Gold Cup Preliminary Round.
Newly promoted to League A of the CNL, Grenada played in Group D, losing 3-1 away and drawing
at home 2-2 to El Salvador and losing away to the USA 5-0. The final match against the USA at
home is scheduled for March 24, 2023 at the Kirani James Athletics Stadium which the USA need
to win to take the top spot in the group.
Concacaf has released information for the upcoming preliminary round and group stage which
include 12 and 16 teams respectively.
The preliminary round, which commences the third week of June (June 16-20, 2023), will qualify
the final three teams which compete in the Gold Cup Group Stage. The Concacaf rankings as of
April 01, 2023, will determine each of the six matchups for Round One.

Then the winners from each matchup will play against each other to determine the three advancing teams.
Thus far, two nations, Saint Lucia and Puerto Rico have secured a berth into the Prelims. The
remaining 10 participants will be confirmed at the conclusion of the 2022/23 CNL Group Stage,
in March 2023.
The 2023 Concacaf Gold Cup Group Stage features four groups of 4 teams, for a total
of 16 teams including invited guest, Qatar. The official draw which will determine the
groups will take place on April 14, 2023. After Round Robin play, the top 2 teams from
each group will advance to the Knockout Stage consisting of quarterfinals, semifinals, and the
final match.

Looking ahead, Interim Head Coach of the Senior Men’s National Team Anthony Nixon Modeste
who was part of Grenada historic Gold Cup squad said, “It would be a great boost of confidence
for the team to secure its second straight Gold Cup and fourth appearance overall.

The two friendlies we had against Saint Vincent and the Grenadines, have given the team significance on field playing time and confidence ahead of our final CNL group stage match against the USA and with
other upcoming opportunities, our development programme for the Spiceboyz steadily
continues.”