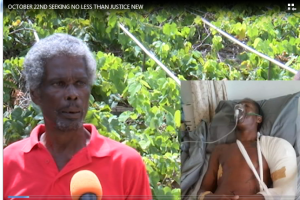 Acting Commissioner of Police, Edwin Martin has promised a thorough investigation into this month’s stabbing and fatal shooting incidents and has asked the nation for forbearance and tolerance, until the investigations are completed.

Last Friday (Oct 30) two police officers were stabbed while on duty in the Town of Saint George by now deceased Trevor Regis. The female police officer remains warded at the General Hospital in stable condition. She underwent surgery after sustaining about six stab wounds to the abdomen and having lost a significant amount of blood.

The other male officer, who was stabbed three times, has since been released, but continues to receive treatment for the stab wounds to his arm and chest.

The incident occurred in the vicinity of Monckton Street between the Courts building and the Grenada National Museum.

67-year old ex-Fisherman Trevor Regis, who resided at Fontenoy, St George, is the father of Chris “Santa” Regis, who was shot on Oct 21 during a police operation near his home about three weeks ago and was hospitalised. Reports are that Chris was smoking illegal cannabis near his home when he saw police passing by, he ran. The officers followed him, he fell and was shot.

Reports are that after visiting his son at the General Hospital, Mr Regis went to the Central Police Station to inquire of the status of the investigations regarding the officer who shot his son. Not being satisfied with the responses there, he went out of control, attacking the police officers with a knife.

A worker from the Financial Complex told this newspaper that Regis was seen sitting on a boat near the Complex for some time. He then walked in the yard between the Complex and the abandoned public library building, bumped into the female Police Officer on duty there and began stabbing her. When he saw a male Officer approaching, he ran after him with the knife into the gates of the Ministry of Finance. The Officer then fired his gun but missed the shot and Regis left. But on his way out, he met another police officer and started stabbing him and he fell into the drain. As he was about to stab him again, a second Officer shot him and he (Regis) fell to the ground.  Regis died while receiving medical care at the General Hospital last Friday evening.

Police investigators are said to be looking into a local television interview the deceased man gave, days prior to the stabbing incident, in which he expressed in part, “This is too ridiculous and this is too out of hand now, somebody got to put a stop to these policemen and them. What they’re doing is wrong.”

Regis had accused the officers of being ignorant in their handling of the situation with his son and questioned why there was not a warning shot.

Acting Commissioner Martin, in a statement issued on Thursday, said a team from the RGPF had visited the Regis’ family and spoke with Trevor Regis on Oct 25. “During my visit I was careful to not cast blame or find fault on any side. Instead I focused on compassion and gave assurance of a thorough investigation into the shooting incident.”

Again on Monday, senior ranking officers of the Force met with family members at the Fontenoy home.

Commissioner Martin said “both incidents raised questions of operational procedures and other matters that must be answered. You can be assured that the RGPF remains committed to fully addressing those questions through the process of thorough investigation now underway.”

He promised that upon completion of the investigations the files will be submitted to the Office of the Director of Public Prosecution, a constitutionally independent office for review and recommendations. “This approach is consistently done to offer an additional layer of objectivity and transparency in dealing with all matters involving police officers,” he said.

Meanwhile, Prime Minister and Minister for National Security, Dr the Right Honourable Keith Mitchell, recently met with the leadership of the RGPF.

Their discussion centred around several matters pertaining to the effective operation of the force and to obtain feedback on what Government can do to help.

Dr Mitchell told the RGPF hierarchy, that he has been questioned in recent public meetings about Police Officers abusing their powers.

“It is critical for me to balance my responsibility as Minister for National Security. It will be irresponsible to do anything that sends the message that Police Officers are less than effective or responsible in discharging their responsibilities. At the same time, Officers must be aware that they have a responsibility to act in a manner that will protect the image of the Police Force,” Dr Mitchell said.

The Prime Minister commended several of the RGPF’s initiatives including the formation of the Cold Case Unit, the introduction of the body cameras and the new thrust in community policing.

Also, praedial larceny, and looking at new laws in relation to the use of Cannabis were discussed.

The meeting ended with encouraging words to the Officers to continue doing the best they can.

He assured them that Government will continue to ensure that the necessary resources are provided to facilitate the effective operation of the RGPF.