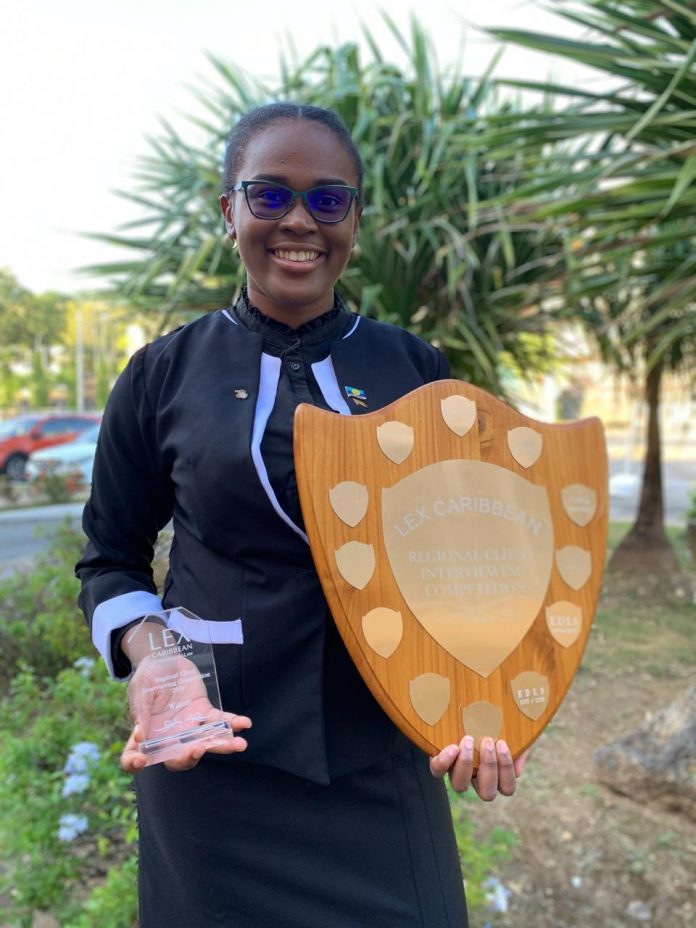 The motto of the St Louis Girls’ Roman Catholic School Striving for Excellence has remained with Sheriece Aliesha Rashelia Noel through an educational journey that recently placed her on the Principal’s Roll of Honour at the Hugh Wooding Law School in Trinidad and Tobago.

Reflecting on her challenging journey to achieve her dream of becoming a lawyer, Sheriece told The Grenadian Voice that she internalised “prolific words” by Sister Gabrielle Mason of the St Joseph’s Convent, Saint George’s that “the consciousness of well doing is ample reward.”

In 2015, she received one of five National Island Scholarships Awards that helped her attend the University of the West Indies Cave Hill Campus.

“My take on education has always been to have a holistic approach to it. Everyone is smart these days, so you need to set yourself apart from everyone else. You set yourself apart by becoming heavily invested in whatever community you are a part of,” she told The Grenadian Voice.

She soon immersed herself in the activities of the University of the West Indies Students Today, Alumni Tomorrow (“UWI STAT”), which is the Vice Chancellor’s arm of ambassadors charged with promoting the university. She served on the executive for two consecutive years, ultimately becoming president.

“At UWI STAT I engaged in an array of activities, from planning and executing CARICOM Prime Ministers’ lecturers, organising Anti-Gun Violence marches in the St. Michael Barbados area, to attending regional youth fora to represent my university. I found that my heavy involvement in co-curricular activities augured well for me in terms of becoming a more mature student, balancing my social and academic life as well as time management.”

She graduated with a Bachelor of Law with Upper Second Class Honours. This disappointed her as she “wanted to achieve the highest honours as a return on the investment made in me by getting an Island Scholarship.”  That meant staying committed to her studies and her goal of excellence while studying at the Hugh Wooding Law School.

“I made a personal pact with myself to do exceptionally well at Hugh Wooding to continue Grenada’s reputation for academic excellence at that institution,” she recalled.

She continued with other pursuits, being part of the winning team for a regional law school competition in her first year and serving as president of the OECS Jurisdiction Committee in her second year.

“Again, my co-curricular involvement helped keep me balanced and on the ball,” she said.

She acknowledged the sacrifices of her mother, journalist Shere-Ann Noel and the support of Grenada. Admitting she was not a “first place student from the get-go” of her formal education, she drew inspiration from the simple things around her and continuously strove for excellence.

“I did this by remembering to put God in everything (Godliness), priding myself in my work (Excellence) and being involved in many co-curricular activities which enhanced my community (Service),” she writes.

A proud mother in a post on social media expressed her gratitude to God and to all who have helped Sheriece to successfully complete her legal education at the Hugh Wooding Law School where she was placed on the Principal’s Honour Roll after receiving a total of 7 As.