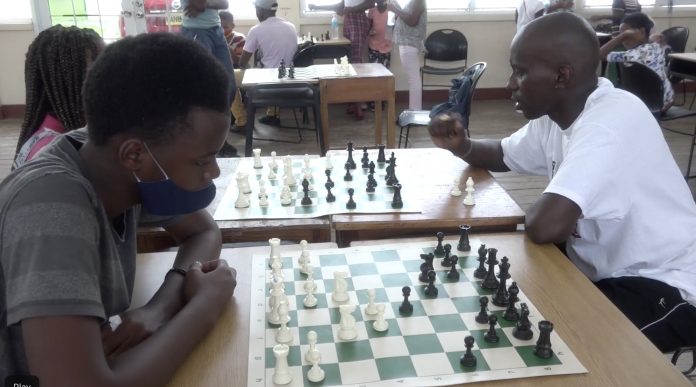 Well over 50 primary and secondary school students have benefitted from  a week long,  first ever “Learn to Play Chess” Summer Camp hosted by the Grenada Chess Federation (GCF).

The Summer Camp, which ran from August 17 – 21 at both the GBSS Auditorium and the Club IBIZA in Gouyave, attracted male and female students ages 7 and upwards, and a few adults. It concluded with a closing ceremony at the GBSS auditorium on Friday afternoon (Aug 21) with the players from Gouyave joining their counterparts in Saint George’s for the final day.

During the week, under the watchful guidance of members of the GCF, the students learnt the names, movement and power of the 16 chess pieces; how to set up the chess board; and the objective of the game. Several engaged each other and their tutors in friendly games after internalizing the basics.

The 16-piece game of chess features two castles (rooks), two knights, two bishops, one queen, one king and eight pawns. Capturing the opposing king is the central objective of the game. The Queen sits as the most powerful piece on the board.

Minister Pierre commended the initiative of the GCF in hosting the week long Chess Camp and pledged the support of the Ministry of Education  in facilitating the introduction of chess in both primary and secondary schools throughout Grenada, Carriacou and Petite Martinique – one of the key objectives of the GCF.

President Ferguson thanked both members of the GCF and the participants for making the Chess Summer Camp a huge success and outlined plans not only to introduce Chess and Chess Clubs in schools but also in communities throughout the state. He spoke of plans being put in place for members of GCF to go into a different community at least once per month to teach and play the game.

Grandmaster Nigel Short, once ranked the number 3 chess player in the world, and who is credited as the main driving force for getting the GCF established during his visit to Grenada in February 2019, sent a video message of congratulations to the GCF, on behalf of FIDE (the International Chess Federation) on the hosting of the summer camp. Grenada became a full member of FIDE in February 2020.

Each participant in the Chess Summer Camp received both a Certificate of Participation and a Chess set during the closing ceremony.

Friday’s ceremony was chaired by Kwabena Amen, Chairman of GCF’s Chess in Schools & Communities Committee (one of its four committees) while Carlyle Glean Jr, Vice-President of GCF, and co-ordinater of the Gouyave Chess Camp, delivered the vote of thanks. Both played key roles in teaching chess to the young people during the week.