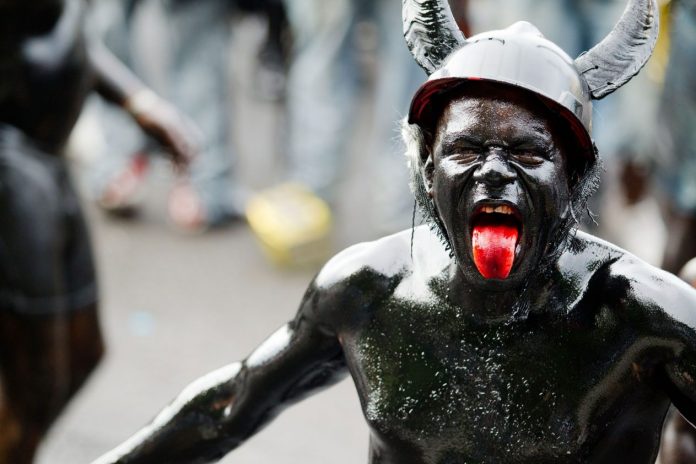 “People be mindful of the dangers of the things you put on your skin,” a warning from former Member of Parliament Roland Bhola last Friday as he warned against playing Jab Jab. This, coming from a former government official came as a surprise to some people who believe that ‘Jab Jab’ have no place in our culture and are constantly lobbying for the government officials who are selling the idea, to think again at what they are doing to the young people. Speaking on local radio Permanent Secretary and calypsonian, Finley Jeffrey, reminded the listeners that the idea of Jab Jab being associated with Emancipation was sold by former Senator Arley Gill and one time Carnival organizer Collin Dowe. He said that idea was bought big time by the public. Jeffrey reminisced when he won the Dimanche Gras show by singing “Take Jab, take Jab….” Well maybe a statement by Journalist Hamlet Mark, that everyone has a part to play, can be applied here. So Jeffrey probably won on the popularity of his lyrics that were helping to push the popular theme that Jab Jab had all to do with the freedom of black people. The song suited the moment; but look carefully at a placard online this year that read ‘Jab Jab rule things, well that is sheet.’

If this year is not a good example that “we’re going the wrong way” when it comes to Jab Jab, then we should all “Take Jab till we mother come.” They came out in their numbers despite the announcement that Carnival was cancelled this year. The Police stood by while distasteful lyrics were chanted. Is anybody still doubting that Jab Jab have now defined themselves as a rebellious Mas? Before the seventies and the introduction of Carnival as a tourism product, Jab Jab bands consisted no more than six people. As a matter of fact the original name was Djab Djab and it was known as Devil Mas. This was also recently confirmed by Chris De Riggs who said that he studied Carnival and his fluency on the subject, gave us no cause to doubt him. He confirmed that Carnival was long before Emancipation and reminded us that people from Haiti also migrated to Trinidad which is close enough to us.

Interestingly research points the origin of Djab Djab to Haiti where they still exist as “evil spirits for hire.” In the old days of the festival in Grenada, the Djab Djab were out in search of souls as they carried huge serpents and other ghoulish items. They were used by parents to keep children in line because if the parents did not pay a small fee, the Djab Djab will take the bad behaved children. Females playing such Mas was unheard of.

Then came the early seventies which saw a strong campaign against Premier Gairy which was organized in interesting forms. After not being able to control the Djab Djab who smeared everywhere with tar and black paint to the chagrin of store owners, Mr Gairy decided to ban that Mas. It was then that Djab Djab took on a different meaning and came out in protest as a rebellious Mas. That year saw the introduction of females, people from the ‘upper class’ and just about everyone playing Djab Djab in Saint George’s. It was the biggest band ever, and the chant was “Gairy say no Djab Djab, we say more Djab Djab.” Even the Chief of Police Mr Holly was smeared with black paint as he stood on the side-walk. Well it is said that history has a way of repeating itself as this year heard lyrics similar to that of the seventies.

These modern Jab Jab as they are now called seemed to have been empowered by the fact that they are now rebranded as part of the Emancipation celebration. While it is documented that Emancipation day started with church services, Government Officials have done well to ignore that fact as they push their own agenda. The Saint Andrew’s Development Organisation (SADO) was on point in the past when they held a church service and the Emancipation flambeau march in Grenville as we payed homage to our African ancestors. There was certainly a measure of reverence. Then the celebration took on a new twist as the Jab Jab found a place in it even while we were under COVID lockdown. While we agree that culture is not static, speculation and simplistic assumptions should not be documented as facts as we struggle to define who we are as Caribbean people, coming to terms with the past to construct our future. Scholars should do thorough research and quote their sources; already a fallacy has been documented that Henry Christophe was born in Grenada. We know now that he was born in Saint Kitts. For years our history was poorly written probably to keep us subservient to the status quo and we were described as ‘third world’. With time that description has changed to ‘developing nations’. The onus is on us to act in a civilized way now that we know that our ancestors came from the developed parts of the world. In defining ourselves let’s try not to live up to Las Casas’ opinion of us that Negroes are madmen and idiots. As Sir Hillary Beckles, Chairman of the CARICOM Reparations Commission said, “Let’s live the lives envisioned by those who struggled for emancipation. The enslaved paid with their sweat and blood [to get back their dignity].”