Ten pros in Grenada’s line up to play El Salvador 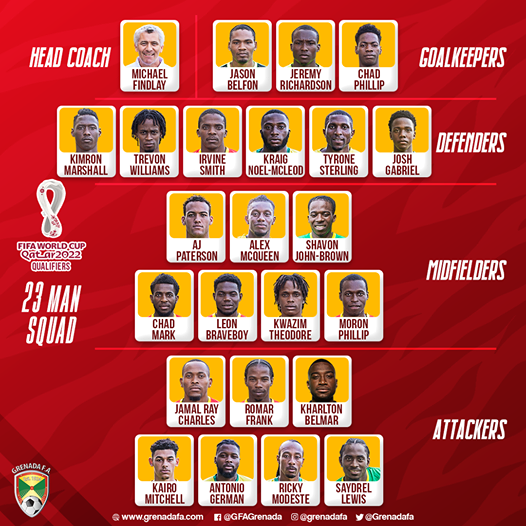 The Grenada Football Association (GFA) has selected a 20-member team for its opening match in the 2022 FIFA World Cup Qualifying Tournament. National Coach Micheal Finley announced the names of the players Via a Zoom press Conference.

The team is made up of 13 Grenadian base players and 10 overseas-based professionals, six from various leagues in England and four from the USA.

Among the players is Jamal, Ray Charles, Grenada’s outstanding goal-getter in the 2019 CONCACAF Nation’s Tournament.

Coach Finely described the squad as an interesting blend of local and professionals, noting that he and his staff were impressed with the attitude of the home base players in training and equally important, was the positive response of the overseas footballers who facilitated via technology because of the COVID Pandemic.

“Realistically, this is our first game and we are playing a good opponent, ranked number six in CONCACAF, and we are going into a hostile environment. Be aware of El Salvador’s football culture and. despite COVID people will support their team”, Said the coach. ” I am impressed with all the players’ response to our preparation.

According to coach Finley, the local players will travel to El Salvador this weekend and the overseas players will join them in San Salvador where they will continue their preparations for the fixture Thursday night kicking off at 9 P.M.