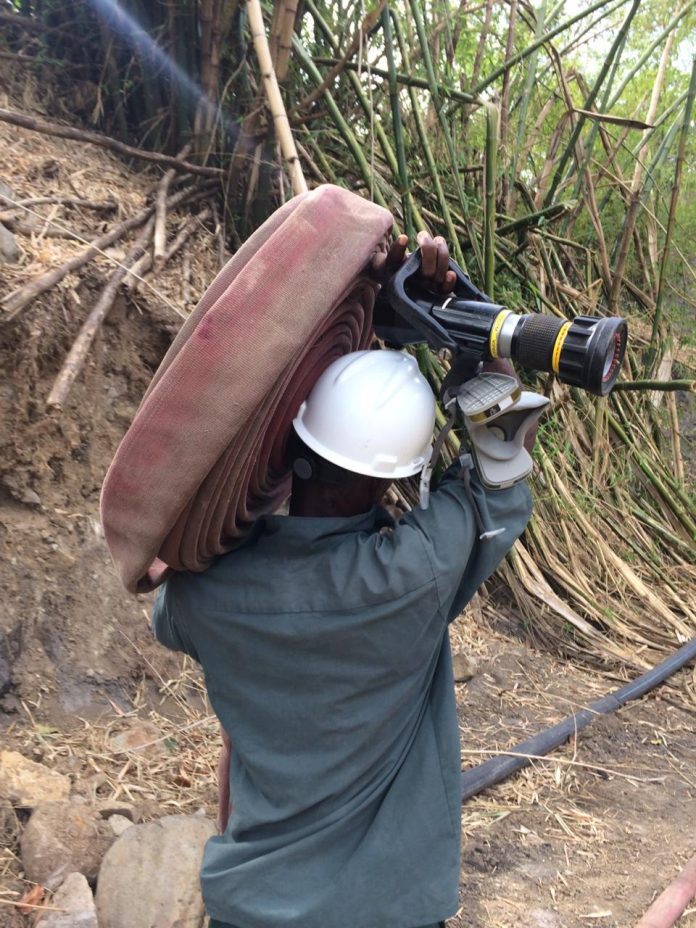 Smoke and fumes generated by underground fires at the Perseverance Landfill continue to have a negative impact on the air quality for local residents.

“It’s important that we are aware of the air quality in the region and ensuring that it is within safe limits,” Minister of Climate Resilience and the Environment Senator Simon Stiell said at Tuesday’s post Cabinet press briefing, as he announced that support for air quality testing equipment is being sought. A decision has yet to be made as to whether equipment is acquired “so we can do our own testing over a prolonged period or bring in experts who are able to do that.”

The Grenada Solid Waste Management Authority (GSWMA), in collaboration with the National Water and Sewerage Authority (NAWASA) and Royal Grenada Police Force firefighters, have succeeded in reducing the open fires by approximately 75% since March.

“However there are still sub terrainean fires which pose a significant threat,” he said, noting that some of the areas where these fires persist remain unsafe for firefights due to surface stability.

“As the garbage burns, the area around it becomes very unstable,” he explained.

The continuous burning deep within the waste creates heat, which produces methane gas and other potentially toxic fumes. For years local residents have expressed concerns about health risks such as upper respiratory tract infections associated with breathing the fumes.

When asked if government has any information about the health impact on local residents such as respiratory ailments or asthma in children, the Minister did not answer directly;  instead he referred to the need for “scientific data” that is expected from the air quality testing equipment.

Acknowledging that “there are times when it is uncomfortable” for people breathing the air and that community outreach needs to be strengthened, he said a series of meetings will take place in the next two weeks with local residents to update them on developments and “to help allay any concerns.”

The Perseverance site, which has been managed by GSWMA for 25 years, has been a dump site for 50 years, according to the Minister.  There have been five major fires in the last 25 years, while underground fires continue.

To date, more than $250,000 has been expended on short-term control measures, including opening an access road from Halifax Bay to the site, installing a pipe network to facilitate daily wetting and applying fire suppressant foams, as well as providing protective equipment and gear for personnel. These measures continue as the GSWMA pursues a long-term waste management strategy that is transforming the dump site into a modern landfill with Caribbean Development Bank financing.

In December 2014, the CDB agreed to loan the Government of Grenada $10.7 million (US) “to finance a project to improve and sustain integrated solid waste management.” The CDB noted at the time that “over the period 2010-13, approximately 35,000 tonnes of solid waste were generated each year in Grenada, Carriacou and Petite Martinique, with 96 percent being generated on mainland Grenada. This represents an increase of approximately 17 percent from a decade earlier, compared to an increase in population of around three percent.”