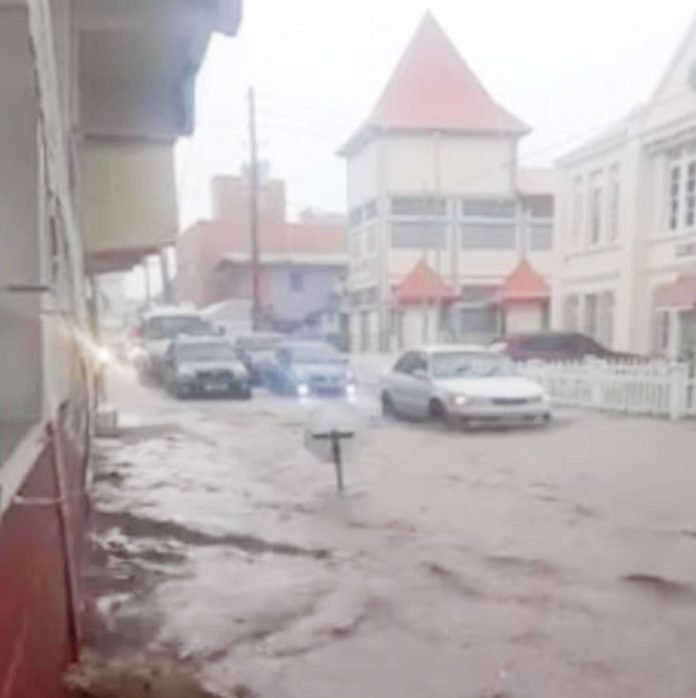 The possible flooding forecasted for last Saturday, occurred on Tuesday instead with the town of Grenville in Saint Andrew being one of the areas impacted, when Grenada was affected by a Trough.

Motorists had to slowly drive through the flooded streets while pedestrians were held up for hours in surrounding businesses, some of which were also flooded.

Also a diversion road in an area known as Pointzfield was covered by water, forcing motorists to find alternative routes to their destination. The nearby construction site where a new bridge connecting Pointzfield and Tivoli is being constructed, was also covered with water.

The National Disaster Management Authority (NaDMA) in an 8:46am post on its Facebook page Tuesday said, “According to the forecaster at the Met Office, the island is being affected by a Trough. The heavy downpours accompanied by thundershowers will continue during the morning but will improve into the afternoon. Please be cautious on the roads and stay dry.”

Meanwhile in an October 03 news release, NaDMA informed that “Forecasters at the Meteorological Office at the Maurice Bishop International Airport have advised of a low chance of flooding for the state of Grenada today Saturday.”

It said, “According to the 8am outlook, an abundance of moisture together with unstable atmospheric conditions is causing scattered moderate convective activity in the vicinity of the tri-island state. As such, cloudy conditions are expected throughout the day.”

Intermittent showers were experienced last Saturday but there were no reports of flooding throughout the island.

A Trough is an extended region of relatively low atmospheric pressure, which usually brings clouds, showers and a wind shift, particularly following its passage.