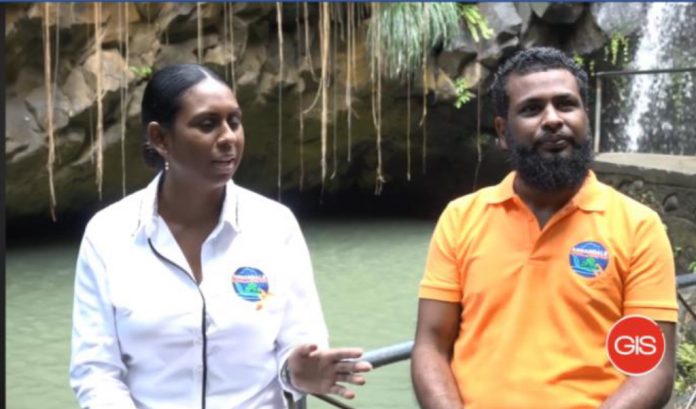 A restaurant and bar, zip line, water slide, playground for children and lifeguard services are among the services/activities to be offered at Annandale Waterfall and forest park, which Government recently leased for the next 25 years.

“It’s a commercialization lease [that] gives us managerial position over the whole site to make sure that it runs properly and profitably. We do not own the waterfall, the waterfall is ours as Grenadians. We are not taking anything away, we are just adding and beautifying to the vibes and natural look,” said Zaheer and Fiona Hamid (brother and sister) in a recent on-site interview with the Government Information Service (GIS).

In sharing their vision for the development of the well-known tourist attraction site in Annandale, Saint George, the siblings noted plans to construct private booths for the vendors, so they can safely store their items on site rather than having to take the items with them when leaving.

The Hamid siblings, who hail from Mt Moritz, are the owners of Sun Hunters, a company that offers adventurers on dune buggies rides to tourist attractions.

They shared that all workers (vendors, jumpers, lifeguards, tour guides, etcetera) will undergo training, including First Aid and insist on offering only local products to visitors.

Along with the promise to enhance the flower garden with different types of gardens including spices, and orchids, there was also a promise for yearly upgrades to the site.

The brother and sister said originally, they were preparing a proposal to develop one of the nation’s forts, but upon learning that the waterfall was up for lease, they jumped at the opportunity and submitted proposals to government since 2016.

They said their persistence to not give up on their wait for an affirmative answer from government was due to the “potential” seen at Annandale, which was previously managed by the Ministry of Tourism.

Speaking to why Annandale Waterfalls? Fiona said, “We noticed that people just come here, take a picture and leave. There is nothing for you to do here. This site is so beautiful….”

However, now with the upgrade plans, Zaheer said, “you will no longer come take a picture and leave, you will come to spend the day.”

The only income at the site was the entrance fee for tourists. But due to COVID-19 challenges resulting in no tourists to the island in the past five months, this presents a need for other sources of revenue; hence, the siblings are looking to the bar to bring immediate help in that regard.

A member of the Jumpers Association at the site had expressed disappointment in them being left out of consultation of the new plans for the site and had expressed hope for inclusion.

Fiona said daily dialogue is taking place with the jumpers and vendors on the plans, noting that training is in the pipeline for them. Cleaning of the site and the erection of rails have commenced