Views on restriction to vehicle importation 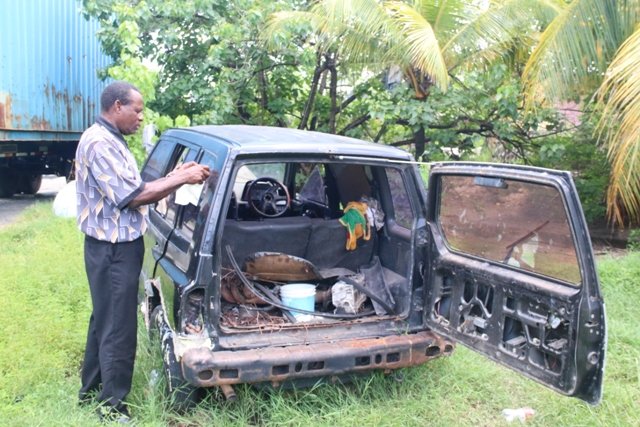 The Grenadian Voice has received mix reactions to Government’s ban on the importation of vehicles exceeding 10 years, the extension in implementing the ban and its call to purchase electric and hybrid vehicles.

During a post Cabinet briefing earlier this month, Health Minister, Hon Nickolas Steele, disclosed that Cabinet approved extending the ban to December 31, 2020. Its implementation was set to take effect on July 01, 2020, as a measure to protect the environment.

He said, “This was given consideration based on the fact that we been going through a COVID-19 period and the fact that this has posed many logistical challenges to many individuals.”

However, one female motorist, who earlier this year registered a new rental company, is not in support of the ban citing it as Government’s strategy to help “its friends” in local automotive companies increase their revenues in new vehicle sales.

The female business owner, who wishes to remain anonymous, believes because persons can afford a used vehicle rather than a new one, this caused a reduction in sales for “those companies”.

She cited the move towards electric vehicles as a way to help the Grenada Electricity Services (Grenlec) in some way, adding that the associated tax relief would not benefit the middle class but the upper class who can afford such expensive vehicles.

Added to that, the rental company owner doesn’t buy into the reason being to protect environment, suggesting that Government can liaise with Trinidad to ship old vehicles there to help clean up the environment.

She doesn’t believe this move will be sustainable in the long run.

A male motorist, who also wishes not to be named, cited the real reason for the extension as Government’s way to “earn additional revenues due to duties and taxes associated with importing used vehicles,” given that it has lost so much during the lock down period due to COVID-19.

For that reason, he believes that there will be a further extension come December.

The motorist doesn’t see the sense in this move being to protect the environment, explaining that when a vehicle goes to the landfill, a machine crushes it, it turns into a cube and then the metals are exported to Trinidad for recycling.

In addition, he questions if there are local technicians to service those electric and hybrid vehicles and how easy it will be to obtain parts.

A company owner, offering brokerage services including direct imports and exports, is appreciative of the ban, noting that there have been a lot of unroadworthy vehicles coming into Grenada especially from England.

Nonetheless, he stated that “this ban cripples poor people in a sense, as a 2010 vehicle is much more expensive than a 2005/6.”

While he welcomes the extension of the ban, he thinks “it should have been lifted for about at least two years because the country and the world would not be back on their feet within the next six months, so people still cannot get the vehicle of their dreams, or an upgrade to the vehicle of their choice because of money. Most people are unemployed and those employed have just enough money to do the necessities; food, send children to school, etc., instead of a vehicle.”

Further, he welcomes the tax concessions for electric vehicles, which are more expensive, adding that those vehicles can be a plus in Grenada’s climate conditions, as there’s sunlight almost daily, and that hybrid vehicles are also good for the environment.

Another male anonymous motorist who does not support the ban in general but welcomes the extension for those who will get the opportunity to purchase a used vehicle they can afford, said this extension also brings in additional revenue for Government and businesses such as brokers, persons doing the number plates, etc., who also have seen a reduction in their revenues.

While he welcomes the concession on electric vehicles, he suggested that Government should also look at concessions on the maintenance as the replacement of the batteries to store energy is very expensive. “We don’t want the batteries to finish and the vehicle has to be parked up and rotten down on the side of the road.”

He too doesn’t buy into Government’s reason for the ban, pointing out that scrap metal is being purchased worldwide. Therefore, he said Government can find a market for old vehicle parts.

“Government is aware that the revenue generated from used vehicles is way more than brand new vehicles and if you are going to kill the used vehicle market, it will kill government ‘s revenue and the spill off businesses – tyres, parts, body workshops, etc.,” he said.

In a May 12 news release, Government noted that “The protection of the environment is among the top priorities of the Government of Grenada as it seeks to lower carbon emissions and reduce the burden on the Grenada Solid Waste Management [Authority] to dispose of and manage the growing number of derelict vehicles that are abandoned alongside public roadways or transported to the landfill which is now close to full capacity.”

More so, the release said, “Grenada has seen an increase in the importation of vehicles in recent years, with manufacturing dates that exceed 5 years. While this has realised additional revenue from duties and taxes and downstream businesses in parts and services, policymakers believe its long-term impact on the economy and environment seem to outweigh the immediate benefits.”