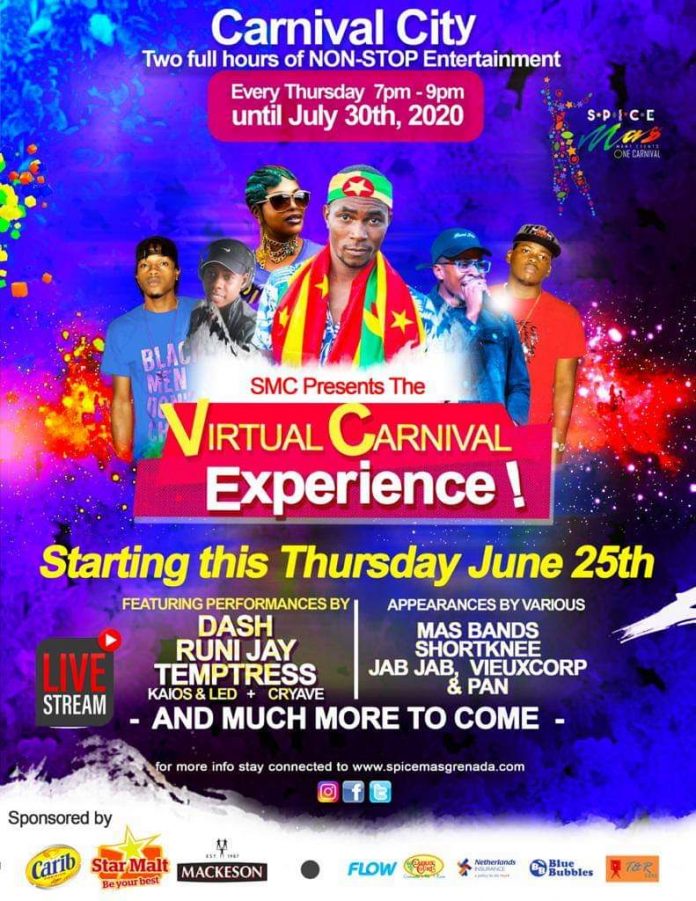 This Thursday (June 25) saw the start of a virtual carnival experience in the form of Carnival City, streamed live on radio, television and social media.

According to the Spicemas Corporation (SMC) in its promotional flyer, the two-hour event showcases non-stop entertainment and is to take place every Thursday until July 30, 2020, from 7pm-9pm.

The first staging was expected to see performances by Dash, Runi Jay, Temptress, among others; and appearances by mas bands, shortknee, Jab Jab, Vieuxcorp and pan.

The venue was one of the conference rooms at the National Stadium with no invited audience except the production crew, the live band members and the entertainers.

Minister of Culture, Senator Norland Cox, while on a radio programme last week, shared that the organisers are seeking to partner with media entities to stream the event. “The whole idea is that we have different media houses doing different weeks, different days,” he said.

Noting that the SMC is dialoguing with stakeholders, the Senator stated that each sector is critical to the growth of Spicemas; therefore, each sector must be a part in the virtual aspect.

With the cancellation of 2020 Spicecmas due to COVID-19, Senator Cox added that the virtual approach to Spicemas is to fill the void leading up to Carnival weekend. He shared that requests have been made and permission was granted for virtual events.

More so, the Culture Minister shared that plans are underway for virtual Soca Monarch and Calypso competitions to take place over the carnival weekend (August 08-11). He said the SMC will partner with Sunshine Promotions in that regards and details will be forthcoming later.

Last Friday (June 19) it was announced that Grenada has zero active cases of COVID-19 as all 23 persons have recovered. This has since changed with the reopening of the airport.

However, in responding to whether the SMC was too quick to decide no Carnival for 2020, the Minister responded, “No, we certainly didn’t. We know there will be a point of re-opening borders and this is where the greatest challenges lie for us as a country.”

He added that Grenada’s first case was imported, therefore, there is expectation that there will be more cases as people return or visit. Hence, management of the re-opening is critical, he stated.

The Minister stressed that everything they do is centered on the health and safety of the nation.

“So whatever decision we make, will be made in the interest of the health and safety of Grenadians.”

He noted that with the new-normal there will be changes and he asks for the understanding of persons, noting that risking one’s health is not important for something that can be done at a later date.

He continued, “We wouldn’t want to lose anyone within the sector due to COVID-19 and being irresponsible. I wouldn’t forgive myself for allowing something like that.”

Consequently, he said leaders must be responsible in the decisions taken, understanding peoples’ lives are at stake.