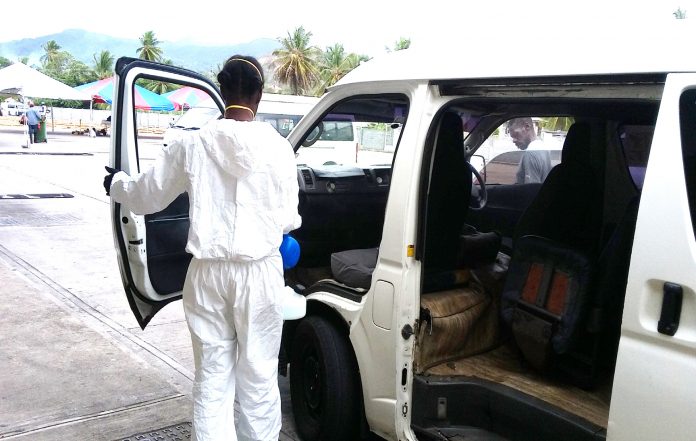 By 10:30 am on Tuesday (June 2) Aniona Hamid had written the licence plate numbers of buses arriving at the Grenville Bus Terminal in her small notebook 88 times. Since the terminal opened at 6 am she had recorded 88 trips.

One of three managers with Essential Care Services, which is based in St. Paul’s, Hamid was recording the arrivals as part of the services the young company was hired by the Ministry of Health to provide.

By the end of that first day in operation, the company recorded Approximately 200 trips at Grenville and Sauteurs and approximately 500 at the two locations in St. George’s. Suited in Personal Protective Equipment (PPE), the company’s 10 technicians use large nebulizers to spray each bus with an alcohol-based antivirus disinfectant.

In a matter of seconds, the fine mist settles on the seats and other surfaces inside the bus. “It kills 99.9 of the germs,” Hamid told The Grenadian Voice.

Protocols for the resumption of service require buses to be sanitised after every round trip. With the announcement on Monday (May 25) by Superintendent Randy Connaught, officer in charge of traffic, during the Royal Grenada Police Force (RGPF) press briefing that “the public transport system” would resume operations the following day; sanitisation has been one of the priorities for users and providers.

Although services have resumed to varying degrees in the seven bus zones, the need for sanitisation increases.

Acting Chief Medical Officer Dr. Francis Martin, speaking at a press briefing on Wednesday (June 3), said bus surfaces are high risk because of “how we do buses” in that passengers hold on to seats, rails and the tops of seats whengetting on and off.

Anna Brizan, permanent secretary with responsibility for transport, also speaking at the press briefing, noted that government is bearing the cost of the sanitisation of buses to ensure the safety of the public.

The issue of sanitisation of buses has been under discussion with the Ministry of Transport and the National Bus Association for several weeks. The permanent secretary noted that “even while there is no partnership agreement in place government continues to live up to its promise and its commitment to support the bus operators by bearing the costs towards sanitisation. In addition to dispensing sanitisation fluid in Grenada and Carriacou, government has introduced a safe and efficient mechanised system to sanitise buses at cost to the public purse,” she said, adding that government will continue to do its part towards sanitisation.