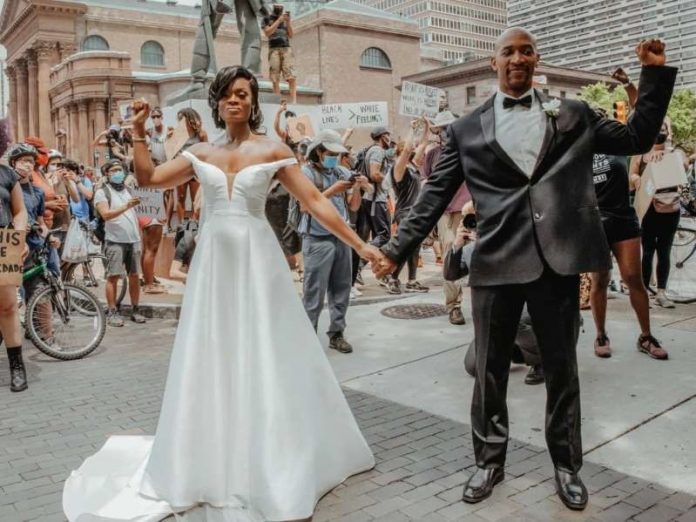 Unique occasion!
A couple got married in the middle of a Black Lives Matter protest after their ceremony was cancelled due to the new coronavirus.
Dr Kerry Anne Perkins and Michael Gordon were getting ready for their “first look” photos before their wedding on the lawn of the Logan Hotel in Philadelphia when they heard protest chants in the distance.
The two had initially planned to have a large wedding, but the new coronavirus pandemic made it impossible, so they’d settled on a micro-ceremony, and had made peace with something a little more low-key.
Within moments, a wave of Black Lives Matter protestors passed the couple’s venue where the two were getting ready on their way to Logan Park where the crowd would be demonstrating against police brutality and white supremacy.
And so, in another change of plans, the two decided to join the demonstration for their wedding ceremony.
“We could hear the sounds in the air. We could hear the sounds of the helicopters above us. You could almost feel the energy around you, and in addition to that, we’re about to get married,” Perkins told Vogue.
“While I was getting ready in the hotel, and I’m reading over vows that I wrote five months ago, at that moment I was just so overwhelmed with emotion.”
As Perkins walked outside, she was met with applause and cheers from the protestors.
She raised her fist as she looked into the crowd to see if she could catch a glimpse of Gordon walking out from the hotel.
“We already had a lot built up inside because of the [protests over the past week],” Perkins told Vogue. “So seeing that we were embarking on this together, and everything we’ve been through, and that now we’re on the forefront of America fighting for justice and trying to push for positivity and change, I’m not only proud as a Black woman and Black professional, I’m so proud of him to represent who we are as a people.”