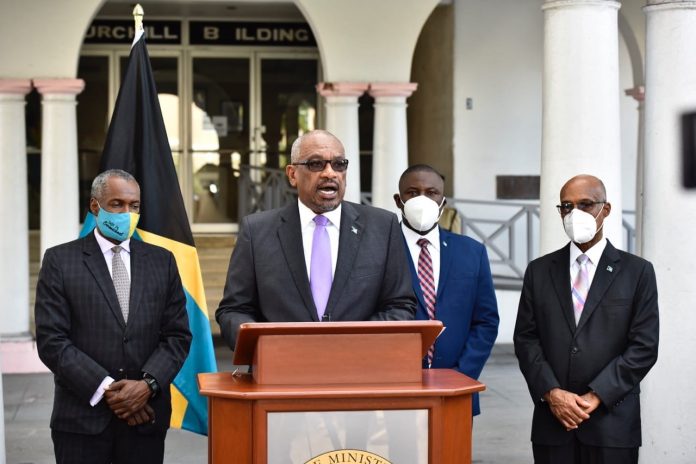 A sharp rise in COVID-19 infections and challenges in hospitalization has spurred Bahamas Prime Minister Hubert Minnis to announce a complete lockdown of the country for the next two weeks, as the bed capacity and human resources were being “increasingly stretched”.

“Our ICU beds are at capacity and non-critical care beds are approaching capacity,” Minnis said during a national address about the economic shutdown of the archipelago, just days after being spared by Hurricane Isaias. “We can and we will rebuild our economy and our society. But what we cannot do is bring people’s life back. We can rebuild, but we cannot recreate new life.”

On Monday, the Bahamas, whose population is about 385,000, confirmed 31 new infections — 9 in the island of New Providence and 22 in Grand Bahama, which was put on a lockdown two weeks ago after it began leading the country in newly confirmed cases.

The new infections, Minnis said, gave a tally of 679 confirmed cases, the country’s highest since it confirmed its first case in March and forced the closure of all of its airports and seaports to outside visitors.

Since the Bahamas fully reopened its borders on July 01 to international visitors, cases have increased exponentially as health officials traced the rise to gatherings and Bahamians traveling abroad to hot spots like Florida, which has been seeing a record number of cases and deaths in recent weeks.

Under the travel policy, anyone arriving in the Bahamas must quarantine for 14 days at their own expense at a government facility and have a negative COVID-19 test before they can leave.

The new lockdown takes effect at 10 p.m. Tuesday. Among the new measures, funerals will be limited to graveside services with only five attendees, excluding the official and funeral home personnel, and most businesses will have to close. Food stores, water depots, pharmacies with curbside and take-away window service and gas stations will be allowed to operate on Mondays, Wednesdays and Fridays with restricted hours. Commercial and international banks will also be open on those days but only until 1 p.m.

“There will be no curbside and takeaway dining or retail,” Minnis said.

The tighter restrictions are not new for Bahamians, who were forced to endure several lockdown periods between March and June. But the announcement comes amid a deadly spike in cases that Minnis fears could cause the collapse of the country’s healthcare system.

It is a reality that the Pan American Health Organization has warned countries in the region to be on the lookout for, and just recently the U.S. Embassy in the Dominican Republic, where there are more than 70,000 cases, issued a similar appeal. The embassy in Santo Domingo urged Americans to delay their travel to the country, saying that an increase in cases was making ICU beds unavailable.

“Much of the world is battling a resurgence of this highly contagious virus,” Minnis said. “Countries like us that had success during the first wave are seeing new, aggressive spread. They too are having to re-institute restrictions, curfews and in some instances lockdowns.”

COVID-19, he emphasized, is extremely contagious and a small hot spot could quickly turn into a large number of cases.

“I know that a lockdown like this is the last thing we wanted as a country. I know the nation is hurting; that our economy is in a terrible state; that many business people are struggling; that many workers are now unemployed; that families are scared; that many of us are afraid of catching the virus,” he said.

On a more positive note, Minnis told Bahamians that Hurricane Isaias, which chugged through the chain last weekend, turned out to be less destructive than the country had prepared for.

From a flyover over Andros, Bimini and the Berry Islands, he said, “there did not appear to be much physical damage to structures.”